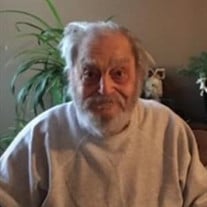 Benny Joe Roth, 86 of Paragon, formerly of Seymour, Eminence and Mooresville passed away Sunday, January 27, 2019 at St. Francis Hospital in Mooresville. Benny was born January 17, 1933 in Illmo, Missouri to Oscar Christoph Wilhem and Ellen Dora Watts Roth. He moved to Seymour in 1938 and graduated Seymour high school in 1951. After graduation, he served four years active duty in the US Navy, followed by two years of active reserve and six years of inactive reserve. On November 9, 1958, he married his lifelong friend, Mary E. Stuckwisch. Benny worked for Pacific Bell Telephone and retired from Cummins in 1988 after 25 years of service. He moved to Eminence in 1989 and worked for Ford until retiring again in 2000. He lived in Mooresville from 2010 until settling in Paragon in 2014. He was very active. He enjoyed gardening and wood working. He was an avid supporter of firefighters, especially Jackson and Hamblen Townships in Brown county, Brooklyn Township in Morgan county and Jefferson Township in Putnam county. Benny was always a very faithful member of the Lutheran Church. He was baptized as an infant at Eislaben Lutheran Church in Illmo, Missouri and was later confirmed at Immanuel Lutheran Church. He and Mary made Zion Lutheran in Seymour their church for many years. Peace Lutheran Church in Greencastle later became their church home until they left to help start Grace Lutheran Church in Cloverdale. Most recently, he was a member of Prince of Peace Lutheran Church in Martinsville. He is preceded in death by his parents, his wife of almost 50 years, Mary Stuckwisch Roth and three sisters, Margret S. Roth, Mildred E. Schneider and Melba L. Blocher. Surviving to cherish Benny’s memories are his children, Ellen E. Roth and husband, Gerald Brown, Katrina A. Roth Oberlies and husband, Donald, Christopher W. Roth and wife, Donnett and Rebecca J. Roth, two sisters, Marie Linquist and Norma Cottingham, grandchildren, Benjamin R. Oberlies, Mary K. Oberlies, Daniel T. Oberlies and wife, Allison, Jessica E. Roth, Elizabeth A. Oberlies, Lillie A. Vaughn, and great-grandchildren, Gabriel D.C. Oberlies and Oliver S.G. Oberlies. Friends may visit with Benny’s family from 4-8 pm Thursday at Burkholder Chapel and one hour prior to the service Friday at the church. The funeral will be at 11 am Friday at Zion Lutheran Church, 1501 Gaiser Drive, Seymour, Indiana 47274. Pastors Jeffrey Stuckwisch and Nathan Janssen will officiate the service. Concluding services with military honors will follow at Immanuel Lutheran Cemetery in Seymour. Contributions may be made to the American Lung Association, the American Heart Association or The Lutheran Hour Ministries through Burkholder Chapel of Thorne-George Family Funeral Homes, 419 N. Chestnut St., Seymour, IN 47274.

The family of Benny Joe Roth created this Life Tributes page to make it easy to share your memories.

Send flowers to the Roth family.