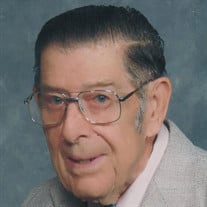 Donald Frederick Voelker, 94 of Seymour, passed away Tuesday, October 1, 2019 at the Lutheran Community Home in Seymour. He was born May 20, 1925 in Lanesville, Indiana to Frederick and Anna Zollman Voelker. He received his bachelor’s degree from Concordia University - River Forest and his master’s degree from Indiana University – Bloomington. Don married Wilma Lorrene Kern on May 11, 1947 at Zion Lutheran Church, Corunna, IN. She preceded him in death August 4, 2019. He taught at Lutheran schools for many years including Corunna, Indiana for 7 years, St. John’s White Creek for 20 years and retired in 1990 from Woodburn Lutheran School, Woodburn, Indiana after 18 years. Don had a love for music. He was church organist for 49 years, started the church choir and led it at St. John’s -White Creek for many years. He also sang with the Lutheran Men’s Choir. He was involved with the Indiana District Evangelism and was a member of St. John’s Lutheran Church – White Creek. He loved to garden and was especially interested in nut trees, growing pecans and english walnuts. He was a sports enthusiast, rooting for Indiana and Kentucky. His greatest love and enjoyment came from spending time with his children, grandchildren, great-grandchildren and his loving wife, Wilma. Don is preceded in death by his parents, his wife of 72 years, Wilma, and his brothers, Martin and Oscar Voelker. Surviving to cherish his memory are his children, Lorrene Felker of Valencia, CA, John (Theresa) Voelker of San Francisco, CA, Jim (Charlotte) Voelker of Butlerville, IN and Pastor Steve (Linda) Voelker of Ft. Wayne, IN, his sister, Norma Blank of Lanesville, IN, his grandchildren, Brandon (Diana) Crews of Encino, CA, Lynn Voelker of San Francisco, CA, Dustin (Lindsey) Voelker of Columbus, IN, Derrek (Josh) Voelker of Panama City Beach, FL, Hannah (Adam) Cooper of North Vernon, IN, Michael (Abby) Voelker of Ft. Wayne, IN, Emily (Nathan) Miller of Indianapolis, IN and Brittany (Andrew) Peasley of Holland, MI. He is also survived by his great-grandchildren, Mila Voelker, Raegan Cooper, Aiden Miller, Kylani Miller, Mira Miller, Rylee Peasley, Avaleigh Peasley and Felicity Peasley. Friends may gather with Don’s family from 2:00 to 6:00 pm Sunday, October 6, 2019 at Burkholder Chapel of Thorne-George Family Funeral Homes, 419 N. Chestnut St., Seymour, IN 47274 and one hour prior to the service at the church. Funeral services will be held at 11 am Monday, October 7, 2019 at St. John’s Lutheran Church – White Creek with Pastor Justin Whitmore officiating. He will be laid to rest next to his sweetheart at St. John’s Lutheran Church - White Creek Cemetery. Contributions may be made to St. John’s Lutheran School – White Creek or Trinity High School in care of Burkholder Chapel. Please share memories and condolences at www.burkholderfuneralchapel.com.

Donald Frederick Voelker, 94 of Seymour, passed away Tuesday, October 1, 2019 at the Lutheran Community Home in Seymour. He was born May 20, 1925 in Lanesville, Indiana to Frederick and Anna Zollman Voelker. He received his bachelor&#8217;s... View Obituary & Service Information

The family of Donald Frederick Voelker created this Life Tributes page to make it easy to share your memories.

Send flowers to the Voelker family.