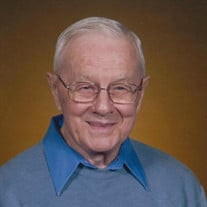 Edward Lewis “Rocky” Hudson, 97 of Seymour, Indiana passed away on Saturday, May 22, 2021. He was born January 31, 1924 in Jennings County, IN to Benjamin and Cordell Adams Hudson. He married Betty Evelyn Findley on May 2, 1942 in Seymour. He was a very loving husband, father and grandfather who was dedicated to his family. Ed served as a PFC in Company L 324th Infantry 44th division in the US Army during WWII. He received the Purple Heart, 2 bronze stars, a good conduct medal and victory medal for his service. After returning home from the war, Ed went to work for Arch Noblitt, mentoring under him in the trade of plastering, giving Ed his career start. Ed then went to work for George Halcomb as a plasterer in Ripley County, and moved the family to Osgood in 1957. It was his co-workers at Halcomb’s that gave him the nickname “Rock.” They lived in Osgood for 7 years before returning back to Seymour. Ed worked for Mr. Northcutt for a number of years, continuing in the plastering business before going into business for himself. Ed later went to work for Seymour Manufacturing until he retired. A devoted man of God, he served as Sunday School Superintendent at Osgood Church of the Nazarene. He was instrumental in getting people to church. He was a long-time member of Peter’s Switch Church of the Nazarene where he was very involved over the years. Ed was a prayer warrior, spending numerous hours praying for the needs of family, friends, his church or whomever God laid on his heart. He was also a member of the VFW and Disabled American Veterans. In 2005, he received the Carnegie Medal for helping save a child from attacking dogs. He enjoyed camping, fishing, cutting firewood and gardening. Ed is preceded in death by his parents, his wife of 71 years, Betty Evelyn Hudson, his sister, Fern (Orville) Greene, his brothers, Floren (Helen) Hudson and Harold (Irene) Hudson and two sons-in-law, Charlie Mulford and Rev. Rodney Osborne. Surviving to cherish his memory are his children, Linda (Harry) Henderson of Osgood, Indiana, Rev. Steve (Linda) Hudson of Wabash, Indiana, Larry (Sharon) Hudson of Seymour, Bev Osborne of Millbrook, Alabama and Becky (Ray) Bohm of Indianapolis, Indiana, sister-in-law, Marjorie Sentz, brother-in-law, Bill Findley, brother-in-law, Glenn Buck Murphy, grandchildren, Teresa Rothert, Jim Henderson, Tim (Wanda) Mulford, Missy (Tim) Keith, Scott (Sandy) Mulford, Mindy (Wayne) Gunter, Cyretha (Mark) Horton, Catrena (Paul) Durgan, Andy (Jaclyn) Hudson, Kristin (Ike) Blount, Brad (Amy) Osborne, Lori (Jamie) Spaulding, Derek (Megan) Bohm and Joey (Hannah) Bohm, 29 great-grandchildren and several great-great-grandchildren as well as several nieces and nephews. Friends may visit with Ed’s family from 4-8 PM Thursday, May 27, 2021 at Burkholder Chapel of Thorne-George Family Funeral Homes, 419 N. Chestnut Street, Seymour, Indiana and one hour prior to the service at the church. The funeral will be held at 11 am Friday at Peter’s Switch Church of the Nazarene, 9528 N. County Road 760 E., Seymour with Rev. Keith Ross officiating. Military Honors and interment will follow at Riverview Cemetery in Seymour. Memorials may be given in Ed’s memory through Burkholder Chapel to Peter’s Switch Church of the Nazarene. Please share memories and condolences at www.burkholderfuneralchapel.com.

The family of Edward Lewis Hudson created this Life Tributes page to make it easy to share your memories.

Send flowers to the Hudson family.