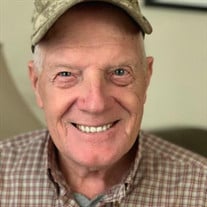 Errol L. “Ike” Isenhower, 81 of Seymour, Indiana passed away on Thursday, February 17, 2022 at Schneck Medical Center. He was born May 10, 1940 in Wayne County, Indiana to Elmer Martin and Ruth Bernice Wright Isenhower. He grew up in Crothersville, attending Crothersville High School. Ike worked many years at the Jackson-Jennings Farm Bureau Co-op before retiring. He also worked at Impact Forge and Hunley’s Sales and Service and for the town of Crothersville. He had a love of the old “hit and miss” engines and was a member of the Jackson County Antique Machinery Association. He enjoyed displaying them at the Jackson County Fair, Fort Vallonia Days and any other festival he could get to. In his younger years, he was a member of the Crothersville Lions Club, the Crothersville Fire Dept where he held many positions and served on the town board. He also enjoyed hunting and fishing. His favorite foods were Mexican and pork chops. He enjoyed sitting on his porch, waving to his neighbors and just watching the world go by. He also loved to mow grass. Ike is preceded in death by his parents and his siblings, Dale Isenhower, Doris Cooksey, Carol Thompson, Gary Isenhower, Ricky Isenhower, Sharon Isenhower, Cleon Isenhower and Shirley Isenhower. Surviving to cherish his memory are his children, Vaughn (MaryJo) Isenhower, Ronnita Isenhower and Madison (Triston) Forward, grandchildren, Logan Isenhower and Ashley Isenhower and great-granddaughters, Lily and Lucy. Friends may visit with Ike’s family from 4:00 pm until time of service at 7:00 PM Tuesday, February 22, 2022 at Burkholder Chapel of Thorne-George Family Funeral Homes, 419 N. Chestnut Street, Seymour, Indiana. Pastor David Schill will officiate. Memorials may be given in his memory through Burkholder Chapel to the Jackson County Antique Machinery Association. Please share memories and condolences at www.burkholderfuneralchapel.com.

The family of Errol L. "Ike" Isenhower created this Life Tributes page to make it easy to share your memories.

Send flowers to the Isenhower family.