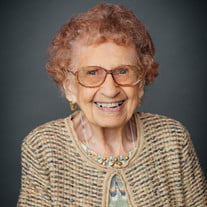 Florence Amelia Corboz Carter, a long-time resident of Seymour, Indiana died March 6th at the Lutheran Community Home where she had resided since 2010. Florence was a proud descendant of Switzerland immigrants, Emile Corboz and Amelie Stuby Corboz. She was born in Flackville, Indiana on April 26, 1917. She spent her growing up years in Indianapolis and was a working single mom of three daughters for many years. She had a long career as an executive secretary at the United States Department of Agriculture supporting her family and living in proximity to her older sister, Elise Wood since deceased. When she remarried in October of 1961 to Thomas Volney Carter, since deceased, she relocated to Seymour, Indiana and became an active community member, participating in various clubs in Jackson County. She was president of the Jackson County Homemakers Extension Club for several terms. She was a member of the Garden Club and a master gardener and a Meals on Wheels volunteer. Just some of her community activities. She was a member of the Reddington Christian Church and her faith was the foundation of her life. She loved to travel and was happiest when she was in her beloved Switzerland. She made many visits to the towns along Lake Geneva spending time in her father’s hometown of Corseaux and her mother’s farm home of Bussigny-Sur-Oron. She traveled to many countries with Volney Carter, participating in farm tours to New Zealand and Australia, to Southeast Asia and to Wales and England. She also loved crossword puzzles. Each day, Florence would complete the crossword puzzle of the day. She is survived by her three daughters, Diane Paige, Lynne Corboz and Gail Dearie and her three grandchildren, Peter Paige, Erin Scott and Jeff Dearie. She is also survived by many step grandchildren and step great grandchildren and step great great grandchildren who are descendants of T. Volney Carter’s four daughters, all since deceased. There will be a Memorial Service at the Lutheran Community Home’s Chapel on Monday, March 11th at 2:00PM. Lutheran Community Home is located at 111 W Church Avenue, Seymour, IN Please make donations to the National Breast Cancer Foundation, Inc. https://www.nationalbreastcancer.org. Arrangements entrusted to Burkholder Chapel of Thorne-George Family Funeral Homes, 419 N. Chestnut Street, Seymour, Indiana.

Florence Amelia Corboz Carter, a long-time resident of Seymour, Indiana died March 6th at the Lutheran Community Home where she had resided since 2010. Florence was a proud descendant of Switzerland immigrants, Emile Corboz and Amelie Stuby... View Obituary & Service Information

The family of Florence Amelia Carboz Carter created this Life Tributes page to make it easy to share your memories.

Send flowers to the Carter family.