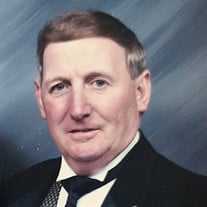 Gerald Dale Peters, 74 of Columbus, passed away unexpectedly at his residence on Tuesday, February 16, 2021. He was born February 17, 1946 in Seymour to Eldor and Erna Hoeltke Peters. On January 20, 1973 he married Madelyn Carol Wayman in Columbus. She precedes him in death. Gerald joined the Army National Guard after high school and was enlisted for 6 years. After his service, he went to work at Reliance/Reeves/Rockwell in Columbus where he later retired after 40 plus years. Gerald was fun to be around and enjoyed joking around with everyone. Gerald was a hard worker and dedicated to taking care of his family. When Gerald was not working at Reliance/Reeves/Rockwell, he was working on his farm alongside his son, Kevin, raising swine, cattle and row crops. After retirement, he continued to farm and take care of his ill wife until her passing. In more current years, he has spent his days visiting friends and family, continuing to help with the farm and spent a large amount of time with his grandson, Dalton. Surviving to cherish his memory are his son, Kevin Peters of Columbus, daughter, Gail (Darrin) Lawyer of Seymour, grandson, Dalton Lawyer, two brothers, Delbert (Carolyn) Peters and Carlos (Barb) Peters and two sisters, Geraldine (Ralph) Otte and Diane (Bob) Kerhof. There will be a walk-through visitation from 5-8 pm Monday, February 22, 2021 at Burkholder Chapel of Thorne-George Family Funeral Homes, 419 N. Chestnut St., Seymour, IN 47274. The family will have a private service on Tuesday. Pastor Mark Wooten will officiate. Gerald will be laid to rest next to his wife, Carol at Riverview Cemetery. Per COVID-19 restrictions, masks will be required, and social distancing will be in place. Memorials may be made to the American Cancer Society through Burkholder Chapel. Please share memories and condolences at www.burkholderfuneralchapel.com.

Gerald Dale Peters, 74 of Columbus, passed away unexpectedly at his residence on Tuesday, February 16, 2021. He was born February 17, 1946 in Seymour to Eldor and Erna Hoeltke Peters. On January 20, 1973 he married Madelyn Carol Wayman in Columbus.... View Obituary & Service Information

The family of Gerald Dale Peters created this Life Tributes page to make it easy to share your memories.

Send flowers to the Peters family.