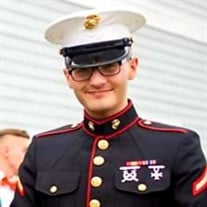 LCpl Hunter Logan Brown, USMC, 21, went home to be with the Lord Tuesday, March 17, 2020 at Camp Lejeune, NC. He was born August 9, 1998 in Bloomington, IN. He was the beloved son of Amy and Buddy Fletcher of Seymour and Stacy and Melissa Brown of Springville, IN. He was married to his best friend, Vanessa Brown of Sneads Ferry, NC. Hunter graduated from Bloomington High School South. He joined the Marine Corps directly out of high school. He graduated from MCRD San Diego Boot Camp and was stationed at Camp Lejeune, NC. Hunter was known for his patriotism, sense of humor and his love of movies, video games and SpongeBob. He was an old soul. You would often see him wearing his fedora hat while listening to Frank Sinatra. He loved to write poetry and his favorite food was pizza from Pizza X where he worked in high school. He absolutely adored his younger sisters and enjoyed spending time with them while home on leave. He dreamed of one day becoming a theatre teacher and sharing his love of theatre with others. Hunter is preceded in death by his maternal grandfather, Buddy W. Booth, his paternal grandparents, George and Donna Sells and his cousin, Robert Booth. Surviving to cherish his memories are his wife, parents, brother, Dakota Matthews of Bloomington, sisters, Brooklyn Brown, Londyn, Aniston and Karrington Fletcher of Seymour and Lilli Holmes of Springville, his maternal grandmother, Jeanne Skirvin (Rick) Harris of Franklin, KY, great uncle and aunt, Morris and Evelyn Stivers of Solsberry, IN, his mother-in-law, Tina Heath of Sneads Ferry, NC, brother-in-law, Sebastian Short of Sneads Ferry, NC, his aunts, Krystal (Bob) Miller of Bedford, Rachel (Jason) Williams of Springville and Nicole (Tye) Frost of Morehead City, NC and uncles David (Abby) Booth of Williams, IN and Andy (Christine) Brown of Indianapolis. He is also survived by cousins, Casey, Katie, Ashley, Ty, Sophie, Tucker, Ben, Adam, Ethan, Nick and Zach. A private family service will be held at 10 AM Wednesday, April 1, 2020 at Burkholder Chapel of Thorne-George Family Funeral Homes, 419 N. Chestnut St., Seymour, IN 47274. Pastor Phil Thorne will officiate. Hunter will be laid to rest with full military honors at Mt. Gilead Cemetery in Bloomington, IN. A public memorial service will be held at a later date. Memorials may be made to the Emerson Elementary All Pro Dads Chapter (checks payable to Emerson Elementary PTO) at Burkholder Funeral Chapel. Please share memories and condolences at www.burkholderfuneralchapel.com.

LCpl Hunter Logan Brown, USMC, 21, went home to be with the Lord Tuesday, March 17, 2020 at Camp Lejeune, NC. He was born August 9, 1998 in Bloomington, IN. He was the beloved son of Amy and Buddy Fletcher of Seymour and Stacy and Melissa Brown... View Obituary & Service Information

The family of LCpl Hunter Logan Brown created this Life Tributes page to make it easy to share your memories.

LCpl Hunter Logan Brown, USMC, 21, went home to be with the Lord...

Send flowers to the Brown family.