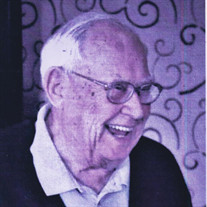 James F. Wilde, 88 of Seymour passed away Wednesday, July 29, 2020 at the Lutheran Community Home. He was born August 26, 1931 in Seymour, Indiana to Arthur and Lora Ortstadt Wilde. Jim graduated from Seymour High School and attended Franklin College. He served in the US Army during the Korean War. He was a member of Immanuel Lutheran Church and was the first president of the PTL, Parent Teacher League, served on the Board of Human Concern and was involved with the VIP. He was a charter member and sang with the Lutheran Men’s Chorus for 28 years. He also organized the MelloTones Barbershop Chorus and helped organize the Anchor House where he served as director. He organized the Veterans Memorial Monument at Gaiser Park and helped organize the bandstand at Sheilds park. Surviving to cherish Jim’s memories are his wife, Janice Wilde, his children, Donald W. Wilde, Richard M. Wilde and Jerri S. Duchaine, his grandchildren, Jill Pryor, Angie Zupan, Cody Wilde, Casey Wilde and Matt Duchaine and great-grandchildren, Kaylee, Austin, Joshua, Kylie, Triniti, Markus, Sydni, Noah and Isabella. He is preceded in death by parents, his first wife, Evelyn Tormoehlen Wilde and brothers, Glen and Norman Wilde. Friends my visit with Jim’s family from 9 to 11 AM, Friday, July 31, 2020 at Immanuel Lutheran Church, 605 S. Walnut Street, Seymour, IN 47274. The funeral will follow at 11 am with Rev. Ralph Blomenberg officiating. Interment will follow at Immanuel Lutheran Cemetery. Memorials may be made to Immanuel Lutheran Church or Immanuel Lutheran School, Music Dept. at Burkholder Chapel. Please share memories and condolences at www.burkholderfuneralchapel.com. Arrangements entrusted to the Burkholder Chapel of Thorne-George Family Funeral Homes, 419 N. Chestnut Street, Seymour, Indiana 47274.

The family of James F. Wilde created this Life Tributes page to make it easy to share your memories.

Send flowers to the Wilde family.