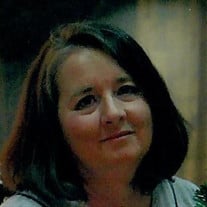 Jerri Lei Steward Frey Words cannot describe our loss. Words can begin to describe our joy. Wife, mother, grandmother, sister, friend. Matriarch. These are words that start. The lessons that last call for more. From Jerri we learned and... View Obituary & Service Information

The family of Jerri Lei Frey created this Life Tributes page to make it easy to share your memories.

Send flowers to the Frey family.