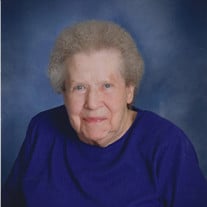 Melba Irene Snyder Stuckwisch, 90, of Seymour, passed away peacefully on Sunday, August 18, 2019 at the Lutheran Community Home. She was born in Seymour, IN on January 2, 1929 to the late Henry and Erna Deppert Snyder. She graduated from Seymour High School. Melba married Donald Stuckwisch on November 26, 1949 at Immanuel Lutheran Church in Seymour. He preceded her in death on May 14, 1996. Melba was very devoted wife, mother, grandmother and great-grandmother. She will always be remembered for her family gatherings. She was a rock to her family who helped them get through some difficult times. She loved to grow flowers and vegetables. Some of her favorite flowers were African Violets. She was very busy woman, not only being a wife and mother, but she worked outside the home at Leer-Ziglar (Home Products, Inc.), for 18 years, owning a hat store in downtown Seymour as well as working at Eckelman’s Shoe store. She was also involved with Immanuel Lutheran Church, where she was a member all her life. She loved people and enjoyed talking with them. She is survived by her children, George Michael (Rita) Stuckwisch of Seymour, Patricia Anne Butler of French Lick, Jacquelyn Sue (Mike) Lane of Columbus and Charles Don (Patti) Stuckwisch of Morgantown, KY, her brother, Louis (Susan) Snyder of Florida, sister-in-law, Brenda Snyder of Seymour, grandchildren, Lori (Mark) Collins, Kelly (Tim) Weisenberger, Lisa Robertson, Kristin (Richard) Drake, Natalie (Ben) Donner, Lindsey (Joe) Montgomery, Christopher (Valerie) Lane, Jamie (Barry) Moore, Harrison (RuthAnn) Lane and Curtis (Samantha) Stuckwisch as well as 21 great-grandchildren and several nieces and nephews. Melba is preceded in death by her husband, parents, sisters, Henrietta Huber, Beulah Clark, Bernice Armstrong and infant Doris Evelyn Snyder and brother, Richard Snyder. Visitation for Melba will be at Burkholder Chapel of Thorne-George Family Funeral Homes, 419 North Chestnut Street, Seymour on Wednesday, August 21, 2019 from 4:00 – 8:00 p.m. The service will be on Thursday, August 22, 2019 at 11:00 a.m. with visitation starting at 10:00 a.m. until time of the service at Immanuel Lutheran Church, Seymour. The Rev. James Rodriguez, Rev. Philip Bloch and Rev. Ralph Blomenberg will be officiating. Interment will be in the Immanuel Lutheran Cemetery. Memorial contributions may be made to the Lutheran Women’s Missionary League at Immanuel Lutheran Church or the Lutheran Community Home. Memories and condolences can be shared at www.burkholderfuneralchapel.com.

Melba Irene Snyder Stuckwisch, 90, of Seymour, passed away peacefully on Sunday, August 18, 2019 at the Lutheran Community Home. She was born in Seymour, IN on January 2, 1929 to the late Henry and Erna Deppert Snyder. She graduated from Seymour... View Obituary & Service Information

The family of Melba Irene Snyder Stuckwisch created this Life Tributes page to make it easy to share your memories.

Send flowers to the Stuckwisch family.