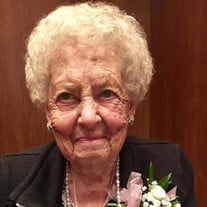 Mildred Carter was born September 24, 1919, in Jackson Township, Bartholomew County, Indiana; she has died at the age of 101 on May 1, 2021. She was predeceased by her parents August Frederick Kleffman and Malinda Hoene Kleffman, her brother Herschel Frederick Kleffman, and her husband, Gail Rex Carter. She is survived by her brother, Virgil Bernhard Gottlieb Kleffman; sister-in-law, Doris Marsh Kleffman; children, Sharon Carter Matthews of Hamden, CT, and Lance Marc Carter of Nashville, TN; five grandchildren and eleven great-grandchildren. She graduated from Cortland High School in 1938; and was baptized, confirmed, and a life-long member of St. Paul’s Lutheran Church (Borcher’s) in Seymour, IN. Her immediate family lived throughout the Southern part of the United States as her husband served in the US Air Force during WWII, the conflict in Korea, and then for twenty years they lived in Columbus, OH, as he became the chief pilot for Executive Jet Aviation. He retired in 1986 when they moved back to Seymour, IN. She and her husband enjoyed camping in RVs and belonged to several camping groups in Indiana. She was active--and received several awards for service--for ten years in the Savannah Council of the Girl Scouts of America as troop camping chairman and troop leader. She also worked in staff positions at Capitol University, Mount Holyoke College, and in the office of the Indiana Adjutant General. The funeral service will be at 3 pm Sunday, May 16, 2021 at St. Paul’s Lutheran Church – Borchers, 10792 N. County Road 210 E., Seymour, Indiana with Rev. Stephen Wood officiating. Interment will take place at St. Paul’s Lutheran Cemetery – Borchers. Memorials may be given through Burkholder Chapel to the American Cancer Society. Please share memories and condolences at www.burkholderfuneralchapel.com.

Mildred Carter was born September 24, 1919, in Jackson Township, Bartholomew County, Indiana; she has died at the age of 101 on May 1, 2021. She was predeceased by her parents August Frederick Kleffman and Malinda Hoene Kleffman, her brother... View Obituary & Service Information

The family of Mildred Eileen Carter created this Life Tributes page to make it easy to share your memories.