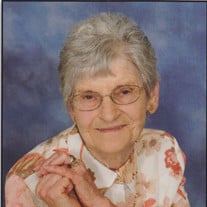 Mrs. Mildred H. “Mickey” Rahn, 93, of Seymour, passed away peacefully on Friday, August 16, 2019 at the Lutheran Community Home. She was born at her family’s farmhouse in the Sauers area on September 10, 1925 to the late Henry and Lydia Von Dielingen Hageman. Mildred was baptized at St. John Lutheran Church Sauers and was confirmed there as well. She graduated Shields High School on May 25, 1944. She married Harold Rahn on August 4, 1956 at St. John Lutheran Church Sauers, who preceded her in death on June 19, 2013. She was a dedicated and loving Christian wife, aunt, and friend. She was a member of Immanuel Lutheran Church, Seymour and was active in Ladies Aid 1, where she served as secretary for many years. In 1989 she retired from Central Pharmaceuticals after 45 years of service. Mickey enjoyed spending time tending to her beautiful flower and vegetable gardens. She enjoyed canning the fruits of her labors. Her favorite color was pink and she was always known for having a clean house. She and Harold loved dogs and had many over the years. Mickey was a member of the American Legion and VFW, honoring Harold’s service to his country. Surviving to cherish her memory are her nieces and nephews, JoAnn Hamilton of Nineveh, Dale (Mary Lou) Siefker, Bill (Nic Minton) Siefker, Kathy (Randy) Brown, Max (Denise) Siefker, Karen Schepman, Janet Cooper, Rebecca (Jerry) Anderson, Mark (Peggy) Hehman, Hugh (Jeannie) Schneider, Vivian (John) Vinson, all of Seymour and Vernon Hageman of Bloomington, IN. She is also survived by several great nieces and nephews, and great-great nieces and nephews. Mickey is preceded in death by her parents, her husband, Harold, her sisters, Dolores Siefker, Luella Schepman, Eunice Hehman, Lowima Schneider, her brother, LeRoy Hageman and nephews, Steve Schepman and Donnie Cooper. Visitation for Mickey will be at Burkholder Chapel of Thorne-George Family Funeral Homes, 419 North Chestnut Street, Seymour on Saturday, August 24, 2019 from 9:00 – 11:00 a.m. The service will be held at Burkholder Chapel at 11:00 a.m. with Rev. James Rodriguez and Rev. Philip Bloch officiating. She will be laid to rest next to her husband at Immanuel Lutheran Cemetery. Memorial contributions may be made to Immanuel Lutheran Church or to the organization of the donor’s choice at Burkholder Chapel. Memories and condolences can be shared at www.burkholderfuneralchapel.com.

The family of Mildred H. "Mickey" Rahn created this Life Tributes page to make it easy to share your memories.

Send flowers to the Rahn family.