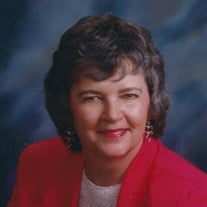 Rachel Browning Bailey, age 85, passed away peacefully January 29, 2019 surrounded by her loving family. She was born May 19, 1933 in Seymour, Indiana to Malcolm Luther & Marcia Judd Browning and graduated from Shields High School in 1951. She married the love of her life, Loran “Red” Bailey at Koolers Knob (near Freetown), who preceded her in death in 2014. Rachel had a variety of jobs working from being an admin for executives to being an auditor for Sears. She found her calling though when she entered the field of sales in 1966. Rachel was a trailblazer in many ways throughout her life. She was the first woman to work in hardware sales for Curtis Industries and quickly became the top sales person in Indiana & Kentucky despite the many obstacles she faced. She later moved onto real estate and succeeded again by becoming a multi-million dollar producer when she lived in Arizona, and repeated that success when she moved to Indiana and then again in Florida. She went to Arizona for Red’s career but never sat in the background. They lived for a time on the Navajo Reservation then moved to Flagstaff and loved it there. Eventually she and Red moved back to Indiana to be near her children. Being a mother to Marcia Ahlbrand, Eric Ahlbrand and Richard “Rick” Ahlbrand was her biggest blessing and she spent her final years centering her life around them. She also loved visiting family and friends that lived far away. In her travels she was able to visit all 48 states in the Continental US. Rachel grew up with two sisters and one brother. She was preceded in death by her sister, Betty Ballard in 2017. Her sister Nancy Kasting is currently residing in Michigan and her brother James “Jim” Browning with his wife June is currently residing in Wyoming. She is survived by her daughter, Marcia Ahlbrand, granddaughter Michanne (husband Brian) Smiddy, son Eric (wife Sue) Ahlbrand, grandson Benjamin (wife Samantha), grandson Nicholas, son Richard “Rick” Ahlbrand (wife Julie), grandson Justin (wife Amanda) Ahlbrand, Jake (wife Elise) Ahlbrand, grandson Max Underhill, three great grandchildren and her many nephews and nieces. Funeral service will be held Saturday, February 2, 2019 at Burkholder Chapel of Thorne-George Family Funeral Homes, 419 N. Chestnut Street, Seymour, IN with visitation prior from 11AM to 1PM (Eastern Standard Time), and burial following the service at Riverview Cemetery, also in Seymour. Memorials can be designated to 1st United Methodist Church, Seymour, Indiana or personal choice.

The family of Rachel Browning Bailey created this Life Tributes page to make it easy to share your memories.

Send flowers to the Bailey family.