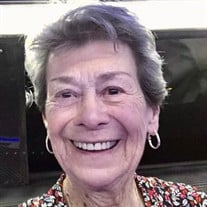 Rebecca A. Goranson, 83 of Seymour, passed away in Greenwood, IN on January 19, 2020. She was born April 14, 1936 in Columbus, IN to Orville and Lily Mae Garlock Barker. She married Ernie Goranson on November 29, 1969. Together they owned Cummings Lighthouse in Seymour. Ernie preceded her in death in 2013 and she continued the ownership of the store. They loved to travel to Dallas each January to the expo to buy lighting for the store. They also enjoyed travelling to Rome and Aruba. Becky will be known for her love of music. She sang and played the guitar and the piano. Her greatest love was spending time with her family, especially her grandchildren.She is preceded in death by her parents, her husband, her daughter, Sabrina Gruber, her sisters, Shirley Bohall, Mary Nelson and Virginia Robinson and her brothers, Wayne, Robert, Lory and Raymond Barker.Surviving to cherish her memories are her son, Keith (De De) Gruber of Greenwood, step-sons, Rick and Rex (Bobbi) Goranson of New Haven, IN, brother, William (Faye) Barker of Cold Springs, CO, grandchildren, Jared (Erica) Gruber of New Whiteland, IN, Zach (Summer) Gruber of Columbus, IN, Sabrina (Levi) Adair of Boulder, CO, Nick (Jenn) Goranson of New Haven, IN, Kelsey (Seth) Snyder of New Haven, IN and Kendra Goranson of Indianapolis, IN. She is also survived by great-grandchildren, Leelanee Adair of Boulder, CO, Jax Gruber of New Whiteland, IN, Gracelynn Gruber of Columbus, IN, Collette Goranson and June Goranson of New Haven, IN. Visitation will be held from 2:00 to 3:00 pm Saturday, January 25, 2020 at Burkholder Chapel of Thorne-George Family Funeral Homes, 419 N. Chestnut Street, Seymour, Indiana. The Memorial service will follow at 3:00 pm. Memorials may be made in Becky’s memory to the organization of your choice at Burkholder Chapel. Please share memories and condolences at www.burkholderfuneralchapel.com.

Rebecca A. Goranson, 83 of Seymour, passed away in Greenwood, IN on January 19, 2020. She was born April 14, 1936 in Columbus, IN to Orville and Lily Mae Garlock Barker. She married Ernie Goranson on November 29, 1969. Together they owned Cummings... View Obituary & Service Information

The family of Rebecca A. Goranson created this Life Tributes page to make it easy to share your memories.

Rebecca A. Goranson, 83 of Seymour, passed away in Greenwood,...

Send flowers to the Goranson family.