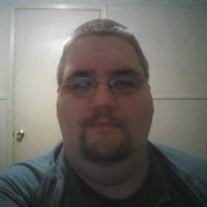 Terry, “TJ” Wayne Merideth Jr., of Seymour Indiana, died December 29th, 2019, attended to by his father and mother. He was born on July 22nd, 1981, in Louisville Kentucky to his father, Terry Wayne Merideth Sr. and his mother, Gladys Belle (Ely) Merideth. Terry attended Seymour High School and graduated in 1999. He would go on to pursue and attain his AAS in Applied Science in Graphic Design from Louisville Technical Institute, Louisville, Kentucky. Terry was employed at Valeo of Seymour, Indiana. Terry’s pursuit of his degree echoed and supported his life-long passion for fantasy-fiction, Japanese animation and video games, which he joyously shared with his siblings, friends and family. Terry also enjoyed creating his own worlds and characters through sketching, drawing and discussion with his loved ones and online friends. Terry was fiercely loyal to those he loved. He was a best friend. He was opinionated, and funny, and observant, and stubborn, and quiet, and loud. He is loved; he is missed more than he’d ever want to be. Terry is survived by his mother, Gladys Merideth and father, Terry Merideth Sr., his stepmother Sandra Ely-Merideth, his siblings, Aaron, Joshua and Jessica Merideth, his half-brother Everett Green, and his nieces Rylee, Allison and Olivia Merideth and his nephew Emery Lindsey. Visitation will be from 4-8 pm Thursday, January 2, 2020 and from 11 am until the service at 1 pm Friday at Burkholder Chapel of Thorne-George Family Funeral Homes 419 N. Chestnut Street, Seymour Indiana. In lieu of flowers Terry’s family has asked memorials to be offered in Terry’s name to Riley Children’s Hospital of Indianapolis at Burkholder Chapel. Please share memories and condolences at www.burkholderfuneralchapel.com.

The family of Terry "TJ" Wayne Merideth Jr. created this Life Tributes page to make it easy to share your memories.

Send flowers to the Merideth family.